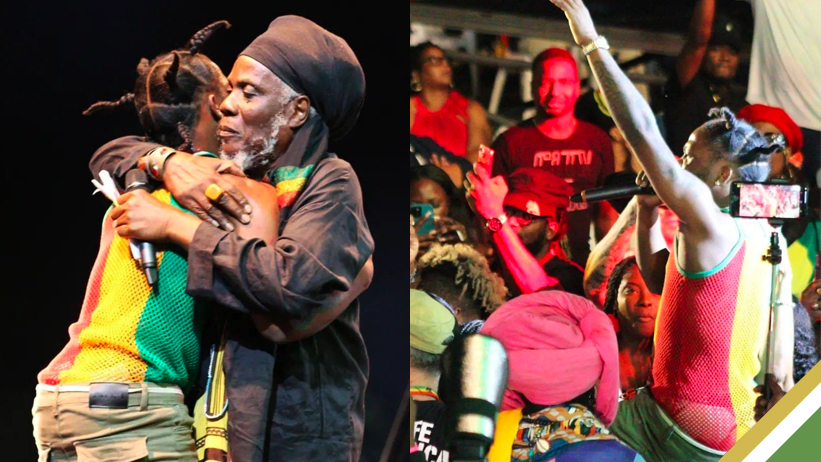 The entertainer was in fine form, delivering a powerful set filled with conscious lyrics and a strong message of unity and an end to violence in Jamaica. His performance deeply moved the audience, and it was clear that Jahshii had genuinely connected with them.

Host Mutabaruka was particularly impressed with Jahshii’s set, declaring on stage that it was more than just a show and that the emerging star had the potential to make a real impact in the world of music.

“A the first me a meet you enuh Jahshii and mek me tell you something, in front of the thousands of people wah deh right yasso. Mi know seh Rebel kinda tell yuh seh do a different kind of show than what you usually do, but yuh see wah yuh just do, a while ago, I don’t want you tek it lightly enuh. You can perform enuh, but you see wah yuh do a while a guh is more than [a] performance, and I would hope that is not because Rebel seh don’t do what you usually do,” Mutabaruka declared.

Jahshii’s performance was not just about the music but also the message he was trying to convey. He performed an emotional rendition of his popular single “Born Fighter” as he walked through the audience, encouraging young people like himself to dream big and work hard. He also spoke about his struggles to reach his current place in dancehall and how he wants to inspire others to do the same.

Mutabaruka also used the opportunity to emphasize the importance of music as a tool to connect with young people and shape their minds. “Music a the most influential thing right now,” Muta stated. “It has the power to inspire, to uplift, and to bring people together. We should use it as a tool to connect with the youth and help shape their minds.”

Overall, Jahshii’s performance at Rebel Salute was a defining moment in his career, and it’s clear that he is a force to be reckoned with in the world of dancehall music. His message of unity and the importance of music as a tool to connect with young people resonated with the audience and solidified his place as a true leader in the industry.

Still, one of the hottest tickets on the dancehall scene, the artiste, whose given name is Mluleki Clarke, ended last year on a high note with the most streamed Reggae-Dancehall song on Youtube (Born Fighter – 24 million) but also two nominations at the upcoming Jamaica International Music Awards (JIMA).

The entertainer is nominated in the categories of “Best Reggae/Dancehall – New Artist” and “Song of the Year” for the hit single “Born Soldier” at the inaugural JIMA Awards ceremony set for next month. JIMA is conceptualized as a vehicle to allow us, as a people, to own and honour our music instead of waiting for others to do so. It is critical because oftentimes when others include our artists in larger awards ceremonies, it is usually from their perspective regarding what/how they think about our music.