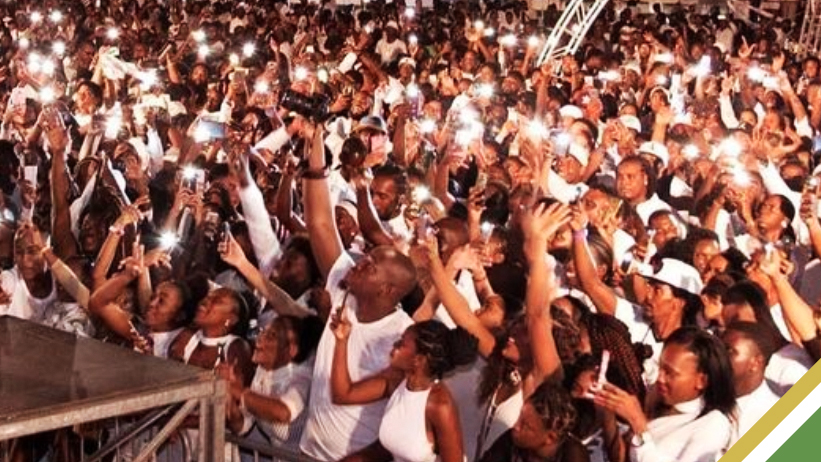 Following concerns raised by St. Lucia’s Tourism, Investment, Creative Industries, Culture and Information Minister, Dr Ernst Hilaire, regarding a man who appeared on stage armed with a gun during a concert featuring Skillibeng over the weekend. The promoters have moved to clear the air on the contentious matter.

In a swift response, the “Onyx” event organisers issued a statement labelling the incident as “Inappropriate Optics” and apologised for its potential risks to patrons. Before affirming that all contracted security detail were members of the Royal St Lucia Police Force, licensed and authorised to provide armed services.

The release read, “As the organisers of the just concluded Onyx concert, we wish to thank all stakeholders for their support following the successful staging of an incident-free event on Saturday evening.

We wish to thank fans and supporters who attended the concert, members of the RSLPF for providing security services, and the lineup of Saint Lucian performers who provided nothing less than stellar entertainment to the public.

We have, however, become aware of concerns raised about a potential safety risk to fans and patrons due to a decision by a member of our contracted security guards to have an open-carry weapon on stage.

We take all public concerns seriously and wish to highlight that all safety precautions to protect performers and patrons were in full effect.

All our security personnel were members of the Royal St Lucia Police Force. Their officers are licensed and authorised to provide armed services.

While we made no demands for specialised security services, we trusted that our contractors would exercise the best judgment based on their assessment of the concert’s requirements and their professional experience.

It must, however, be noted that the armed officer’s appearance on stage was only for a brief moment and that he did not trail the artiste throughout his performance, as organisers and security officials quickly moved to rectify the situation.

Despite that, we do recognise that the on-stage optics may have given the wider public a false impression of the event and what we stand for. As such, we wish to apologise for causing any offence to the public. This was by no means intentional.

We also take the opportunity to assure our patrons and the wider society that moving forward, closer attention will be paid to this sensitive logistic element to avoid any discomfort.

Again we wish to express profound gratitude to all stakeholders for their contribution towards the successful staging of our event.”

Meanwhile, Dr Ernst Hilaire maintains that the promoters involved will be held accountable.