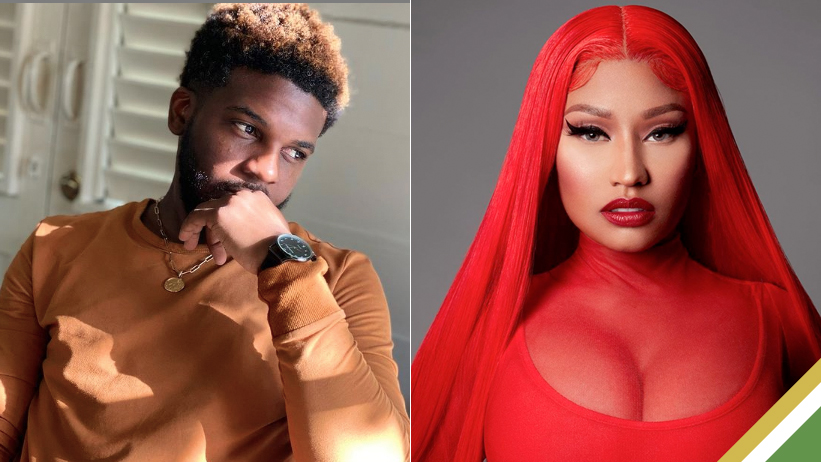 Hosts of the popular entertainment podcast THE FIX have found themselves in a miff following a review of Nicki Minaj’s FINE NINE remix released last Wednesday, October 5.

In an episode of Quik Fix, a weekly entertainment roundup of topical matters titled “Ding Dong Stealing Dances? Likkle Miss ‘Fine Nine’ Remix; A Marley Wears’ White Lives Matter’ Shirt”, it appears utterances made by the duo Ari and Naro were not entirely appreciated by the Trinidadian rapper.

Critiquing the collaboration, outspoken co-host Naro expressed that he did not “love” the song and had “mixed feelings” about the project while questioning if it was even still Skeng’s song. He also suggested the move could be a deflection away from her alleged divisive nature with other females in the rap game. In the same vein, he also heaped praises on Minaj for bringing together all that Caribbean female star power on one track. Especially with the brewing tension between Dovey Magnum and Spice, something only an artiste of her calibre could do.

Responding to the critique, the American-based rapper posted a lengthy rant in the video’s comment section on Youtube; she wrote,

“Imagine sitting up there with all this hate in your face & body language to speak on something so positive. Is it still Skeng song? Skeng just made history on both iTunes US all genres & iTunes hiphop. He just made history on billboard digital song sales chart. Shouted him out at the vmas during my Vanguard Award acceptance speech & spoke on him in a recent interview. Been promoting his music on IG for MONTHS before I even met him or worked wit him. I did an entire video to the version with just he & I!!!! Paid for out my pocket, not by a label. I speak to him multiple times a week. Our relationship is way beyond a song. Aye BOI!!!!!! I’m I do what I WANT not what I NEED. Deflect? Divisive? You think I GAF about someone saying who I do & don’t work with? Bwahahaaa! They’ve said far worse. I’ve been supporting dancehall since before my first album. Put Beenie on my first album. I did this out of the LOVE I have for SKENG, dancehall & the talented women featured. I sit back with my feet kicked up. I could never do another song ever again in life & tour around the world for the next hundred years if I WANTED TO. I don’t do music to prove points. I do music b/c music is my passion, my peace, my gift to share with the world. You think this is hurting Skeng? Eediat!!!! Fully dunce! Introducing millions of new ppl to him hurts him? Does it hurt the producers? How could y’all sound so bitter and literally TRY to FIND something bad to say.? Referring to Spice as “bestie got her feature” in that snide way. What type of low vibrational ting unu deh pon? Fix up uno self! It DONT look good! I WOULD tell uno fi go suck out unu big pu$$y mada but I have too much respect for you BOTH. I’m happy for you. Keep shining! But 1 thing. Don’t ever play with me again. QUEEN. ICON. BLESSED. HIGHLY FAVORED. BOSS. SAMURAI MIND. They move on MY TIME. They WATCH ME!!! They want to be ME!!!! LIKKLE MISS OBSESSION!!!! JAH KNOW ️. I’m very disappointed in you both. Shoutout the women who made this such a dope experience and BODIED their verses. TALENT OVER EVERY BBC TING! Maddest life! Ratty Gang. Port of Spain to Spaintown! Rrrraaaahhh!!!”

Following Nicki’s rant, Naro, in the latest episode of Quik Fix released earlier today (October 14), adopts a more prudent demeanour while addressing her remarks and even extended an invitation for an interview on the platform whenever she visits Jamaica.