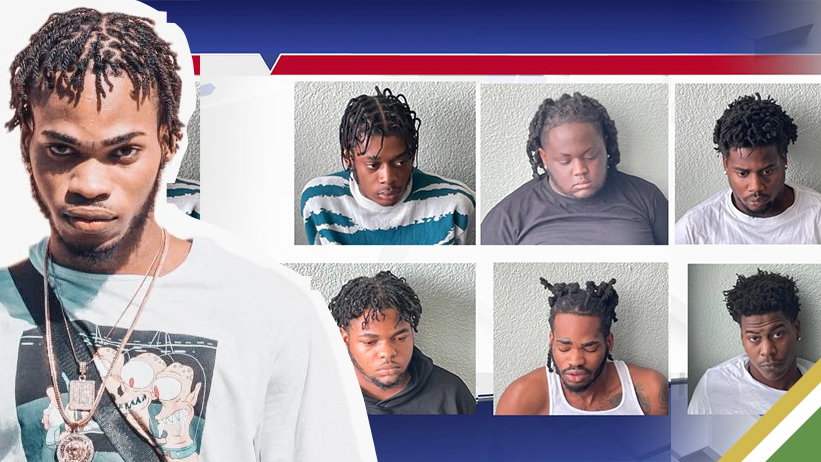 Prism Marketing Consultants understands that emerging dancehall artiste JayBlem (Jaheim Cox) was among a group of men arrested by U.S. law enforcement during an operation in Florida.

The Jamaican teenage athlete-turned-artiste and son of Dancehall veteran Danny English was arrested along with five other men by U.S Marshall with the assistance of BCSO and the SWAT relating to a homicide case.

The Bay County Sheriff’s deputies and the U.S. Marshals Task Force located and arrested the six men in connection with a wanted fugitive homicide case from Brooklyn, New York.

The U.S. Marshals Service reportedly requested assistance on November 9 in identifying a fugitive named Anelka Green. In October, Green allegedly got into an argument at a Brooklyn restaurant, left, and returned shortly to fire multiple rounds inside, according to reports from New York law enforcement. Allegedly, one of the bullets struck an innocent bystander, who later succumbed to their injuries.

Law enforcement says Green then fled New York for Panama City Beach. Later in the week, investigators confirmed Green was staying at a local condominium and obtained a search warrant for Green and his associates.

Members of the task force, assisted by BCSO SWAT, contacted Green, who allegedly provided bogus names during his interview.

When the search was completed, six men inside Green’s condominium were arrested after officials allegedly found several hundred grams of marijuana, MDMA pills, and more than $23,000 in cash.

Deputies said the men were from Jamaica and came to Panama City Beach with Green after he committed the shooting.

Jaheim Cox, 19, Shamar Wedderburn, 22, Renato Campbell, 22, Shamarie Livingston, 22, and Kevar Taylor, 19, were all arrested and charged with possession with intent to distribute marijuana, possession of MDMA, and possession of paraphernalia.

Anekal Green was charged with fugitive from justice for the charges of robbery and homicide and is now also charged with giving false names to LEO, possession of marijuana with intent to distribute, possession of MDMA, and possession of paraphernalia. Green is also out on bond from New York for a firearms charge from September.