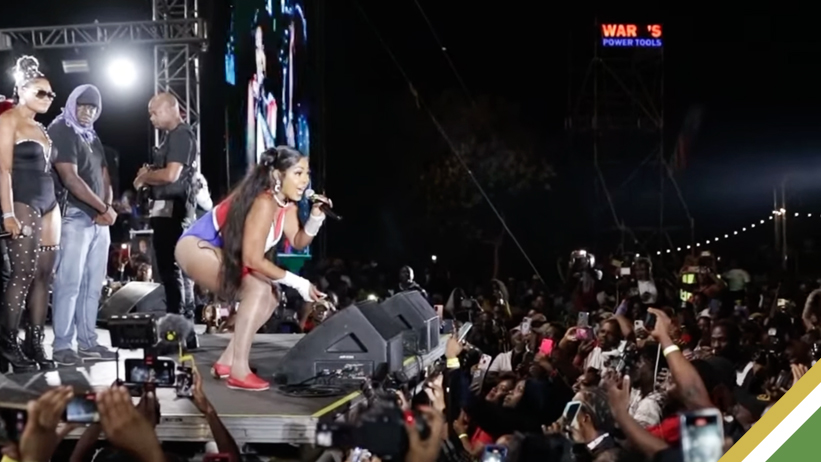 As the sun rose on the STING concert, fans eagerly awaited performances from Valiant, Kraft, Skeng, and Jahshii. But just after 6 am, chaos erupted as uninvited individuals stormed the stage, causing tension and threatening violence.

In response, police officers drew their weapons to control the situation as barriers tumbled, causing concertgoers to duck for cover. Fortunately, no shots were fired, and the situation was eventually brought under control. Despite the disruption, the Boxing Day concert came to an unfortunate and premature end.

The above fiasco resulted from the billed clash between dancehall upcomers Malie Don and Polo YG, who took the stage minutes after 6 am and began trading fewer lyrics and more expletives, creating an inflamed atmosphere. Earlier dancehall aspirants Queenie and A’mari also had a physical toss-up on stage that was quickly subdued by security, the clash resumed, and Queenie was eventually declared the winner.

Other highlights of the night included a stellar set from St. Vincent dancehall artiste Sita, pulling some of the biggest forwards. Pamputtae entertained with a “short man” and got emotional about the trials of being a single mother. Etana, Fanton Mojah, Christopher Martin, Jada Kingdom, Shane-O and Vanessa Bling all delivered short but commendable sets.

Due to schedule overruns and time constraints, several highly anticipated acts did not perform, including Jahshii and Skeng. After singing only two songs in a rush set earlier, Valiant gave concertgoers an impromptu acapella performance in the parking lot, much to the appreciation of all.

Overall, the highly publicised return of STING, despite its new location, did not live up to its billing as it was plagued with the same issues as previous stagings, which left many patrons displeased.